(BLAINE) – Officer Grant Breems said he didn’t know what to think when he was summoned to the office of Blaine Police Chief Brian Podany recently.

It turns out the chief just wanted to alert Breems to not think he was about to be the victim of a hoax.

Breems was notified he was the recipient of a new paddle board from Columbia Heights-based Paddle North.  The company made an effort this fall to honor local first responders and veterans for their work in the community.

“First and foremost, we are a veteran-owned company that employs multiple veterans,” said Dan O’Brien, one of the original employees of Paddle North. “It’s something that’s important to us, overall, and, I think, individually, if it wasn’t the case, would be important to us overall.”

O’Brien put out a call on social media for nominations.

“I think police officers are not only still be expected to be on-call, and there when you need them,” O’Brien said. “They’re facing a lot of heat these days, and a lot of varying opinions about how their job should be done when they’re the one out there doing it, so, Officer Breems was great to include and get out on the water with one of our paddle boards.”

Breems said he was surprised and honored all at the same time.

“There’s a lot of people that do more than I do. You know, I guess all my partners, all the people in this department, are probably equal to getting this as I am. Some of them probably more,” he said. “But, I was the one they picked.”

His nomination came straight from Chief Podany. Breems has worked for nearly thirty years as a law enforcement officer, and said it’s the variety and the people he can help that keep him coming back. 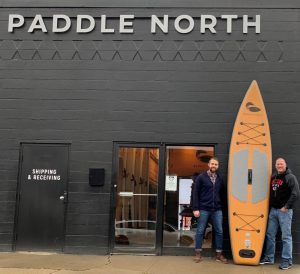 “People always need help,” he said. “Whether it’s helping them after they’ve fallen, in a car accident, just kind of being the voice of calm when somebody’s upset.”

And, come spring, Breems hopes to make good use of his new toy.

“I haven’t even taken it out of the packaging yet because it is too cold,” he said. “My wife asked me, ‘Oh, are you going to get out right now?’ and I’m like, ‘Eh, it’s just a little chilly.’ The lakes were still open when I got it but I’ll wait until it warms up a little bit. I thought about trying to find a pool!”