(CIRCLE PINES) – By day (and at least two nights a month), Dean Goldberg may be just another Circle Pines City Council member. But starting soon, you may see him dressed as a sort of public servant superhero at events in and around the small city in South Eastern Anoka County.

“(People) sort of laugh at it,” Goldberg said of his costume, which includes a cape and black mask around his eyes, a la Zorro. “But they listen. And people listen very readily to the informaino and appreciate the fact that they probably didn’t realize that filling out the Census was important for people living in Circle Pines.”

Goldberg is part of the city’s Complete Count Committee.  It’s goal is to spread the word about the 2020 U.S. Census in order to make sure as many of the city’s residents are counted.

In 2010, 90 percent of Circle Pines residents took part in the Census.

“On the downside, we only had 4,910 people,” said Goldberg. “That 10 percent, if they were counted–we would have been a city over 5,000 (residents) and we would not have to get the waiver to get the funds for state roads.”

“Basically, these funds that come from the state based on Census counts help keep taxes low,” said Goldberg. “They prevent (council) from needing to raise taxes.” 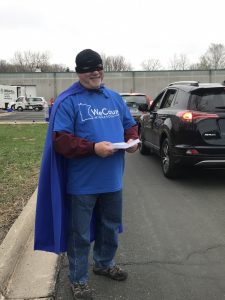 Circle Pines City Councilman Dean Goldberg dressed as “Census Man” at the city’s recent recycling day to try to attract more attention to efforts ahead of the 2020 U.S. Census.

“There are a number of issues people have these days,” he said. “There’s a distrust that the information will be used inappropriately against (residents). Some people just believe it’s not important to be counted, and so we have to overcome those hurdles.”

They also need to reach more people who may live in rental properties. Goldberg said renters, for whatever reason, don’t typically participate.

“We have about one in five households in Circle Pines that are rental units, so we have a large population of people that are resistant to taking the Census and we’d like to focus on them.”

The other big reason for the most accurate Census count possible is determining representation in Washington, D.C. and St. Paul.  There is some talk that Minnesota may lose a seat in the U.S. House of Representatives to a state whose population is growing more quickly like Florida, Texas, or even Montana, Goldberg said.

“The only way we can not lose a seat is to do a better job than other states at counting people,” he said. “So, we’re putting a major effort out there.”