(BLAINE) – The owners of Northtown Mall sued the Metropolitan Council, the agency that operates Metro Transit, in 2020 over the location of its bus transfer station at the mall. Washington Prime Group, based in Ohio, alleges Metro Transit is in violation of its agreement to vacate shared parcels of land that currently are the spot for the Northtown Bus Transit Hub. The station went up 25 years ago and is currently the link for several bus lines from Blaine into the Twin Cities and likely the terminus of a possible bus rapid transit line that the Met Council is soliciting public input for in hopes of moving forward in the next few years. 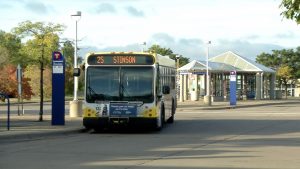 The owners of Northtown Mall in Blaine are suing the Metropolitan Council and Metro Transit over the bus station on the ring of the mall’s property.

The plan was to move the bus station to the southeast corner, in a vacant mall parking lot along Sanburnol Drive NE along the Spring Lake Park-Blaine city limit border.  That angered residents who live along the road, who said the noise and light pollution from the station would negatively affect their homes.

In 2020, it was revealed that the bus station would not move to that parcel after all. In an interview earlier this month, a Metro Transit spokesperson told North Metro TV the agency was still looking at options.

Washington Prime sued the Metropolitan Council over the matter in March 2020 in Anoka County.  According to a Met Council spokesperson, Judge Thomas Fitzpatrick has set a trial date for the matter coming up in August.

“Our preference is always to try to resolve issues without litigation,” said a spokesperson for the Met Council. “The Council and Metro Transit continue to look for a path forward that is in the best interest of customers, the Mall (sic), and local residents.”

According to the lawsuit, a 1995 agreement between owners of the mall and owners of the bus line laid out a plan for co-ownership of the land the bus transit hub would be located on, and any termination of the agreement would not come within the first ten years. If and when it did come, the owners of the bus transit line would be responsible for demolishing all structures it built and used on the site, including shelters, transit islands, and traffic circulation lanes. The work would have to be done no sooner than six months after the notice of termination. This deal went through changes of ownership on both sides, and was extended in 2011, according to the suit.

The suit demands Met Council pay the rent Washington Prime says it owes (at this point, about $275,000 and growing) and immediately vacate and demolish the site. It alleges Washington Prime has the right to recoup the value of the land as well as the full title to the parcels in question.  It also claims Met Council has trespassed on the parcel since December 2019, and wants the Met Council to pay in excess of $50,000 in damages–in addition to $50,000 for legal fees associated with these proceedings.