(BLAINE – Oct. 5, 2021) – There’s not a lot left of the bus transit center at Northtown Mall in Blaine. Heavy equipment began tearing it down and hauling away the debris in September, and Metro Transit said it has plans for a new, consolidated set of bus plazas on the southern edge of the mall property, across the street from the former location and closer to University Avenue.

“We’ll be building new transit plazas with new bus shelters with heat and light and other customer amenities,” said Jim Harwood, Assistant Director of Engineering and Construction for Metro Transit. “(It’s for) a variety of reasons. The biggest one is just in discussions and coordination with Northtown Mall ownership and also building a new facility that’s appropriate for our existing and future needs as we look at how we serve our customers.” 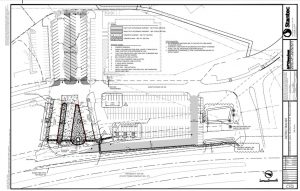 Plans show the configuration of the new Metro Transit bus transit center at Northtown Mall in Blaine, with construction set to wrap by the end of the year.

What Metro Transit or Metropolitan Council officials would not say is if the move is in response to a lawsuit Washington Prime Group–owners of Northtown Mall–filed to get the station moved. That lawsuit, according to Metro Transit, is still active.

It also comes as the Blaine city officials are kicking off meetings later this month to start talking about concepts for redeveloping the area(s) surrounding the mall.

“It gives the mall a pretty good understanding of what they have left for land to develop and that will be part of our planning process,” said Blaine Community Development Director Erik Thorvig. “We’ll really have a better understanding of who owns what and where new development can go in that area.”

Thorvig said the city wants to explore all options for development in the out lots immediate to the mall itself–where the bus station was located–and even as far north as the former Rainbow grocery store building.

“We’re going to look at all options,” said Thorvig. “That includes housing–I know we’ve seen that at Ridgedale and Rosedale and Southdale and some of those areas that have experienced new development around the mall–and then look at retail, office, and hotel or whatever type of uses that could pop up in the area.”

He said Metro Transit–including its plans to operate a bus rapid transit route to and from Northtown beginning in the next decade–is obviously a big part of the future of the region.

“There’s different types of developments that are interested in locating next to a rapid transit line,” said Thorvig. “It’s a much different dynamic and opens up new possibilities as it relates to transit-related development.”

The preliminary concept plans could go to Blaine City Council as soon as November, with plans to have public input open houses in the next few months, said Thorvig.